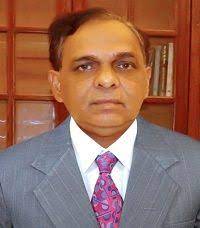 Prof. Baishnab Charan Tripathy, from Cuttack, Odisha earned his BSc and MSc degrees with Botany major from Utkal University, after which he joined Jawaharlal Nehru University where he worked for his PhD on Primary processed of photosynthesis and plant productivity in the Schools of Life Sciences and Environmental Sciences under the supervision of late Prof. Prasanna Mohanty.  From 1981-1987 he studied and worked in the USA, first at the Ohio State University, Columbus (1981-83) as a post-doctoral researcher and worked on bioenrgetics of chloroplast and mitochondria.  Subsequently he moved to University of Illinois, Urbana-Champaign (1984-87) where he worked as a research associate and worked on heterogenity of chlorophyll biosynthesis.

Dr. Baishnab C Tripathy joined as Assistant Professor in the School of Life Sciences, Jawaharlal Nehru University, New Delhi, where he started his photobiology laboratory and subsequently promoted to Associate Professor and Professor. On deputation from JNU, in 2011, Professor Tripathy joined as Vice-Chancellor of historic Ravenshaw University, Cuttack, Odisha and is worked with distinction on education reforms and infrastructure development of the University. Upon completion of his 3 year tenure as VC, he joined back Jawaharlal Nehru University and served as the Dean, School of Life Sciences, JNU. In August, 2019, Prof. Tripathy joined as a distinguished professor in the Department of Biotechnology, School of Engineering and Technology, Sharda University, Greater Noida, UP.

His research interests are in the area of molecular plant physiology, photobiology and biotechnology. He significantly contributed to our knowledge of photosynthesis.  His work on 5-aminolevulinic acid, a precursor of heme and chlorophyll, as a photodynamic herbicide is very interesting.  It induces green plants to accumulate excess amounts of tetrapyrroles, which act as photo-sensitizers and cause singlet oxygen-mediated lethal damage to plants and its photosynthetic apparatus.

His work on plant senescence in relation to chlorophyll metabolism has demonstrated that chlorophyll biosynthesis takes place in senescing leaves in the face of extensive catabolic reactions. His discovery of suppression of photomorphogenesis by red light is mediated by phytochrome-A is novel and interesting. He has cloned the porC gene and demonstrated its function in Chl biosynthesis. He has overexpressed porC in Arabidopsis and Mustard for resistance of plants to photodynamic herbicides and salt-stress.  He has demonstrated that overexpression of Chlorophyllide a oxidase (CAO) that converts chlorophyllide a to chlorophyllide b significantly altered the chlorophyll a/b ratio of plants that have profoundly increased the light-harvesting function of plants and increased their photosynthetic capacity and plant productivity.

On leave from JNU, he worked for National Aeronautics and Space Administration (NASA), Kennedy Space Center, Florida, USA and worked on space-grown plants and studied the effect of zero (micro) gravity on photosynthesis that could generate oxygen for human survival in space. He has till now authored over 100 research articles and patent, and is on the editorial board of the journal “Horticulture, Environment and Biotechnology” and is reviewer of several outstanding journals in Life Sciences.  He has so far mentored 27 PhD students and large number of M. Phil and M.Sc. students.

Because of his excellent research contributions rofessor Tripathy was elected as a fellow of the Indian National Science Academy in 2005.  He is also a fellow of National Academy of Sciences and National Academy of Agricultural Sciences. He is recipient of JC Bose National Fellowship of Govt. of India. His name appears in Marquis “Who is Who in the World”.  He was NASA/NRC Senior Fellowship, Kennedy Space Center, USA, and recipient of Rockefeller Foundation Biotechnology Career Award, USA, Samant Chandra Shekhar Award in Science, Gold medal for outstanding contribution to science by Srivastav Foundation, Lucknow, Professor P. Parija Samman etc.